It is with a hurting grief in my heart and a pain in my soul that I share the news of Roland Keijser's passing. The loss is unmeasurable on so many levels I hardly know where to begin. Maybe by saying what everybody who ever heard him play already know: He was a true master musician. One of those who could make me pick up an album if his name was in the credits. Because he always played the truth. The instrument – no matter if it was the saxophone or if it was a flute from faraway lands – was always an extension of himself. He played like a spiritually enlighted philosopher, phrasing his knowledge of man and music with the immediacy of genuine honesty. He was always on a different level than everyone else. He played like Roland Keijser, and Roland Keijser only. He was a meaningful Musician, always demonstrating the innermost comprehension of Music.

He was also my friend. No, we never met in real life, but we exchanged a vast number of messages and letters over the years. Our Facebook conversations were often long and sometimes intimate, almost in a hushed way. We didn't so much write as we spoke to each other, even if the voices we used were those of the written word. Sometimes we quarrelled – I'm an outspoken person and so was Roland. I wasn't afraid of telling him straight when I thought he was completely off on some topic, and he wasn't afraid to tell me if I have crossed the line of civility. Friends can do that and still be friends when there's a sincere, mutual respect.

But most of the time, we had similar ideas and during our extensive conversations, we touched on a wide array of topics. Even when agreeing with each other, we could make the other person consider other possibilities, calibrating our opinions, shifting our perspectives. Talking to him about Blå Tåget and Arbete & Fritid often generated a tsunami of memories, opinions, historical facts that was impossible to find anywhere else. He narrated his own past, and I eagerly sucked up every drop of information he humbly provided me with.

And he never gave up. During his last months, he battled the big C, but he kept on working. He told me he was busy making new music, and just before his passing, he uploaded a set of brand new recordings to Youtube. A farewell gift to his fans and friends? Probably. He stoically faced his fate, he knew he wasn't able to fool the grim reaper. But he died so fully living that the circumstances allowed him to. He never stopped being a Musician. The full Keijser discography is voluminous; the Arbete & Fritid and Blå Tåget albums are just a little part of something much, much bigger. It's always an interesting listen, often illuminating, never irrelevant.

But it was Arbete & Fritid that introduced me to his music. That particular band was instrumental (no pun intended) in igniting my interest in progg. If you will, Roland Keijser was crucial to the birth of this blog. Without him, this would likely never have happened. His music so often revealed the invisible to me. And I can't stop listening. Arbete & Fritid's first album still moves me in a way few other albums do. It phrases things that the spoken or written language can't fathom. His music, old and new, is indestructible. Resistant to time. It's music that channels the eternity while being an indisposable part of it. Thus, it will never be forgotten, Neither will its creator.

May you rest in peaceful spheres, Roland, and from deep within my heart, thanks for everything you've done for me!
Posted by SwedishProggBlog at 7:20 PM 6 comments: 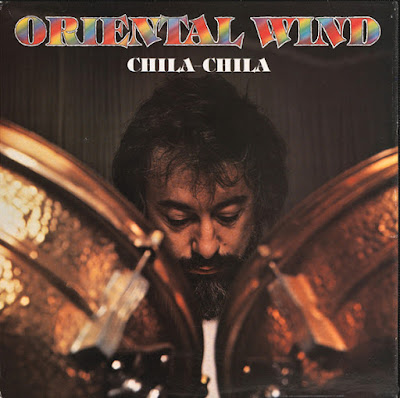 The second Sonet album credited to Oriental Wind with great Turkish drummer Okay Temiz at the helm. Those familiar with his other albums including those by the majestic Sevda know what to expect from ”Chila-Chila”, a fine blend of Turkish modes and Swedish jazz.

Those thrilled by Oriental Wind's eponymous 1977 debut but disappointed by the too fusion-y ”Bazaar” from 1981 should certainly lend an ear to this effort. Lots of Eastern flavours and a constant motion forward thanks to Temiz himself, Bobo Stensson's piano excursions and Lennart Åberg's forceful and often transcendent sax playing.

Only ”Julu Kara Nayni” feels a bit bland in the company of the more adventurous tracks dominating the album, such as ”Chila-Chila”, ”Estergon Kalesi”, and most of all the aboslutely marvellous ”Karasar Zeibegi” with its haunting, melancholy melody soaring in the heights of Arbete & Fritid passing Fläsket Brinner's ”Gånglåten” on the way.

Posted by SwedishProggBlog at 10:17 AM 11 comments: 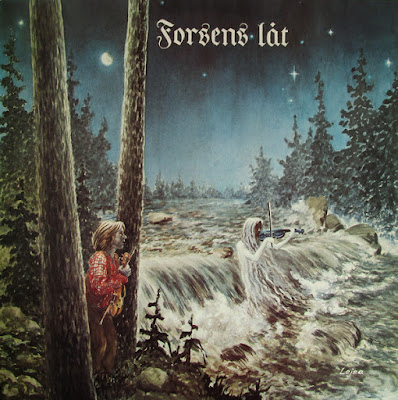 One of the true masterworks to come out of the Swedish folk music scene of the 70's, and a pioneering work too when it came out in 1975 as the first release on the Hurv label: ”Forsens låt” was the first time ever than the soprano sax was used on a record with Swedish folk music. Handled by Arbete & Fritid illuminary Roland Keijser, it beautifully supports, chases and embraces Anders Rosén's fiddle in a number of traditional tunes augmented by a slew of carefully crafted Rosén originals. The music moves in a space of its own, familiar yet different. Explained Rosén in an interview I did with him and Keijser in 2014:

”'Forsens låt' is an obvious attempt at creating a 'fantasy dialect' within folk music. It sounds like a clearly defined style, but you can't really place it in time or geography.”

”We were careful not to sentimentalize the old folk music,” Keijser elaborated, ”and we didn't want to jazzify it or dress it up in nifty chord progressions or adapt it to God-knows-what. We just wanted to play the songs straight without any hidden intentions, only adding a new timbre through the soprano sax.”

The results are stunning, thick with rich textures of the intertwined timbres of the fiddle and the sax, and melodies dense with equal parts of pertinence and alluring ancient lore. It's Swedish blues without any stylistic evidence of American blues as we know it.

I realize that Swedish fiddle music isn't everyone's cup of tea, but if there's one album I'd like to recommend to listeners to the uninitiated, this is it. It's a masterpiece. 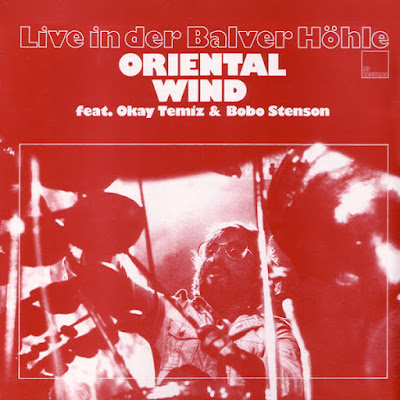 A document of Oriental Wind's powerful performance at the fifth annual jazz festival held at the Balver Höhle in Balve, Germany in June 1978. The impact is only lessened by a somewhat muddy sound, but if you can listen beyond the aural fidelity, you're in for a fine treat. All material is based on Turkish traditional music arranged by band leader Okay Temiz, but the quintet (also comprising Oriental Wind regulars Lennart Åberg on saxes and Bobo Stensson on piano) have a go at it with an explosive Coltrane-like fervour. The ensemble playing is on top level, with the five performers working up a transcendental frenzy, culminating at the end of ”Dere Geliyor Dere”. Haci Tekbilek's baglama (a Turkish lute of the saz family) is an excellent addition, adding a U.S. Kaleidoscope touch to parts of ”Fidayda”. That all tracks were originally released on their brilliant studio debut doesn't make "Live at the Balver Höhle" redundant at all. The live versions are a very good complement to the studio incarnations, although they would have benefitted from a better recording. 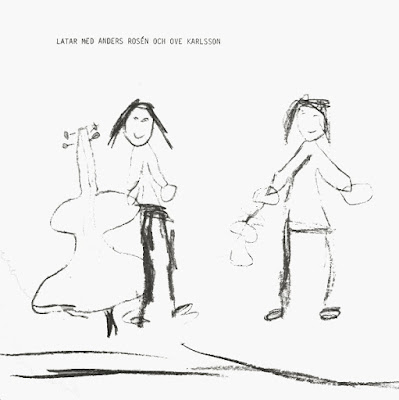 A rarely seen album with a tight Arbete & Fritid connection. Ove Karlsson was of course one of the most prominent members of Arbete & Fritid, while folk fiddler Anders Rosén joined them for their 1977 double album ”...sen dansar vi ut”, like this album released on Rosén's Hurv label. Here Karlsson provides cello, zither and guitar, while his compadre sticks to a fiddle with sympathetic strings. The combination of fiddle and cello in particular adds baroque sounding characteristics to these original Rosén pieces which is very pleasing to listen to. And both participants are of course class 'A' musicians with good ears for complementing interplay.

While not a surefire recommendation to people not used to music deeply rooted in traditional tunes and folk fiddling, the album has a fine atmosphere with plenty of droning qualities that might appeal to fans of ”...sen dansar vi ut”.

The front cover drawing is by Anders Rosén's daughter.

No links found.
Posted by SwedishProggBlog at 10:15 AM No comments: 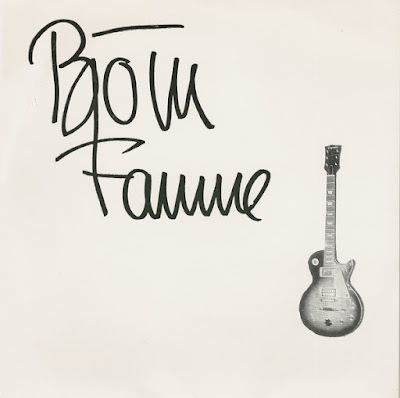 The track here that really stands out here is the EP's only non-instrumental and also Famne's most famous one, ”Vampire”. Full of wild, screaming electric guitars over a persistent heavy groove it wouldn't have been out of place on Scorpion's ”I Am The Scorpion”. It would also have been the best track on that album. Instead this example of excellent half sloppy hard rock was resurrected for the third volume of the comp series ”Who Will Buy These Wonder Evils" which turned into a fullblown classic.

Björn Famne is still active and has played with several bands in different genres over the years. His recorded output is relatively meagre though. Apart from this very rare EP (made a bit more obtainable by the Woah Dad! Record Store Day 12" reissue in 2016), there are a couple of tracks by Famne led band Famntag on the local ”Aktiv Ungdom: Alsterett” V/A comp. He also made an album and a couple of singles with Örebro band Lix in the early/mid 80's, and appeared on an EP by Christian youth choir Ingarps Ungdomskör, ”Jag vill leva nära dig” (release date unknown).

Full EP
Posted by SwedishProggBlog at 9:09 AM 2 comments: 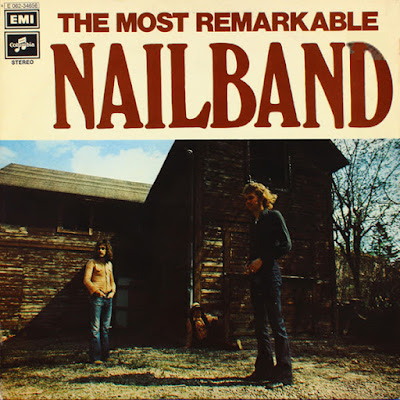 Stylistically speaking, this is a somewhat parenthetical inclusion, but seven of the songs on "The Most Remarkable Nailband" were written by Lasse Tennander, either on his own or together with Nailband main man Peter Lundblad. (Lundblad also appears on Tennander's 1972 debut album ”Lars Vegas”.) The album – the only one released under the Nailband banner – is far from as remarkable as the title suggest, but it's an OK effort if you're into early 70's West Coast stuff and singer/songwriter pop. Parts of it are somewhat similar to the very first few and unjustly and pettily slagged albums by Tomas Ledin. Two songs in particular are fine, album opener ”Lady of Lore” with a not too overt strain of turn-of-the-decade Moody Blues, and ”Dreamer” that wears its David Crosby influence on its sleeve and features some nice dreamy guitar. (Not a far-fetched reference as the album also includes a cover of Crosby, Stills, Nash & Young's "Ohio", however not particularly memorable.)

As a sidenote, the rumour (supported by a Discogs entry) that there's a monochrome variation of the album cover seems entirely erroneous, originating from a cover scan posted on the Swedish Musikon/Progg.se website that had a bad habit of publishing brown & white pictures of record covers.

Lady of Lore
How Do You Do
Life on the Road
Come Play with Us
Night Song
Music Will Not Die
Ohio
Dreamer
Let It Shine Down on Me
Summer Sunday Morning Song
Queen Beauty
Posted by SwedishProggBlog at 9:08 AM No comments: