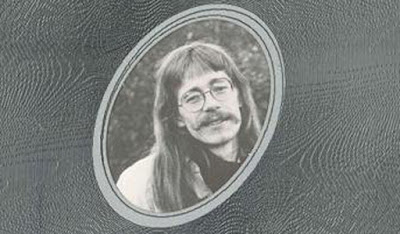 The sadness is unfathomable. Not long ago, Bosse Skoglund, noted drummer with a plethora of bands, artists and constellations left us for the otherworld. And now, his long standing friend and collaborator in excellent music has followed suit – Peps Persson. Peps, who pretty much helped raise awareness of American blues and, perhaps even more important, basically singlehandedly brought Jamaican reggae to Sweden just passed away at the age of 74 after a long period of illness. His impact on Swedish music cannot be overrated. He was an everpresent spirit touching the hearts of not only progg lovers but casual listeners for decades. And more amazingly, always a bit from the side of the progg movement and the mainstream. He carved out his own niche where he was free to do whatever he wanted, to immerse himself in music that really mattered; i.e. music that grew in the hearts of those who endured hardships and had the gift to express them and touch others again. He will be sorely missed like few others. His passing away has left a hole in my heart that no other Swedish musician will be able to mend. So much more could be said, but words fail me at this time. Blessings Peps, wherever you went!

Posted by SwedishProggBlog at 4:36 PM No comments: 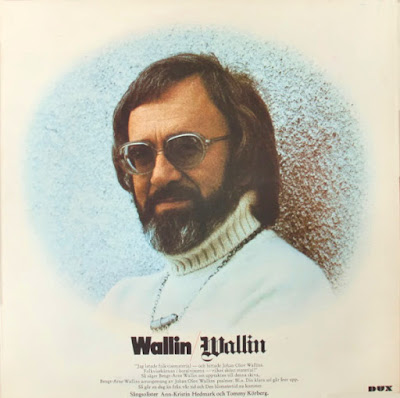 Bengt-Arne Wallin was noted jazz musician and composer (he died in 2015) with a special love for Swedish folk music, and played with everybody from hugely popular easy listening icon Lill Lindfors to Polish jazz maverick Tomasz Stańko. His 1971 effort ”Wallin/Wallin” is centered around old Swedish chorales and psalms with words by poet and lyricist Johan Olov Wallin. The selected psalms make for a song cycle of sorts that straddles the lines between prog, fusion, third stream jazz, and progressive big band. Such an ambitious venture surely demands skill to pull through, and Wallin indeed managed to drum up a plethora of seasoned and in-demand players. Names such as the two Jans Schaffer and Bandel are – needless to say – featured, as are Okay Temiz, Ola Brunkert, Stefan Brolund to name but a few. For the vocals, Wallin approached Ann-Kristin Hedmark and Tommy Körberg, Körberg then a member of newly formed genre-defying battleship Solar Plexus.

The ambition level is dazzling, but the ideas and efforts often get in the way of the music itself. Everyone involved do their best and you can hear they're pretty thrilled by the whole project, but in the end, the music gets too unwieldy and sometimes a bit too cerebrally sluggish to take off. It's interesting as a period piece, but the album's sheer abundance is too fatiguing for an unadulterated listening pleasure. Simply put, a little too eager for its own good.

Posted by SwedishProggBlog at 10:19 AM No comments: 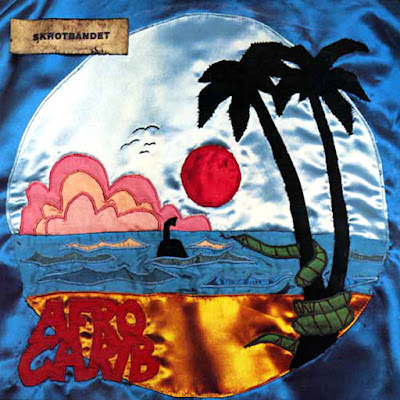 For their second album, Skrotbandet recruited previous members of Göteborgs Visgrupp and Göteborgs Brechtensemble and changed their direction from a once avantgarde constellation (as represented on various artists compilation ”LIM – Levande improviserad musik från Göteborg”) to a band taking most of their cues from afro-Caribbean music. The album title alone gives away the stylistic switch.

”Afrocarib” almost plays like a catalogue of styles from the region. We get Cuban rhythms, a couple of reggae tracks, a little touch of calypso and several dashes of fashionable salsa – everything bereft of the respective styles' original weight and meaning. This is a textbook example of when putting style before content. It's all mathematically precise, well-studied and competently executed but the most important thing, the one you've got to have within you, is conspicuously lacking: the passion that comes with the circumstances the music is rooted in.

Ignore this album and check out Skrotbandet's sources instead for the real McCoy - the list of recommended albums printed on the album's lyric sheet provides suggestions for more fulfilling listening experiences than the album itself (even though my personal recommendations probably would have looked different). Nacksving's label honcho and album producer Tommy Rander probably loved it though, given his penchant for dogmatically correct but soulless statements.

Posted by SwedishProggBlog at 11:00 AM No comments: 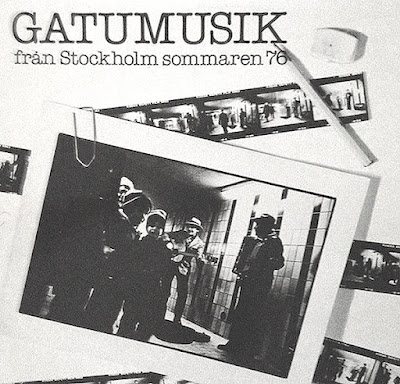 While not a progg album proper, this one fits hand in glove with the progg zeitgeist and ethos. The title means ”street music from Stockholm, summer '76”, and that's exactly what it is, street musicians performing in their natural environment on the streets of Stockholm to unsuspecting passers-by. Few of them got beyond obscurity with the exception of Don Partridge who already had several albums under his belt, and even a 1968 hit song in ”Rosie” and another one, ”Blue Eyes” from the same year. He was a drifter, touring the streets of Europe and settled in Sweden where he lived for years in the 70s. He was a well known and colourful character with his one-man-band act that even I caught as a kid in those days when visiting Stockholm with my parents.

The music on the album ranges from The Salvation Army and old-timey to traditional fiddle tunes and organ grinders. None of it is very good; the best track being Andrés Daniel Spatola's fluent but redundant performance of old Neil Young chestnut ”Heart of Gold”, followed by Patridge's stomping take on ”Kansas City”. It's not an album you'd put on for musical enjoyment but it's fun as an aural snapshot of times gone by.

Posted by SwedishProggBlog at 12:33 PM No comments: 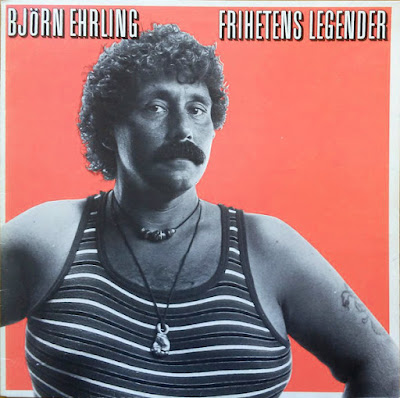 Björn Ehrling was a 'visa' singer, that particular Swedish brand of singer/songwriters that was widely popular in the 60s and 70s. Ehrling released only a few albums during his recording career, two of them on the YTF imprint. This is his second LP, and with a title like ”Frihetens legender” (”the legends of freedom”) you might expect politically inclined songs with a possible Spanish or Latin flair. If so, you're almost right – the material is chosen entirely from the Portugal's rich fado tradition and then translated to Swedish.

Ehrling's got a decent voice used in the same slightly over-zealous style that often comes with the visa genre. It's a largely forgettable album included here only as a favour to the Turid completists out there as she adds backing vocals to the track ”Nu är vi fria”. Bear in mind though that her effort is of minimal proportions, and unless you knew it's actually her, you could mistake her for just about any angel-voiced chanteuse.

Posted by SwedishProggBlog at 12:12 PM No comments: 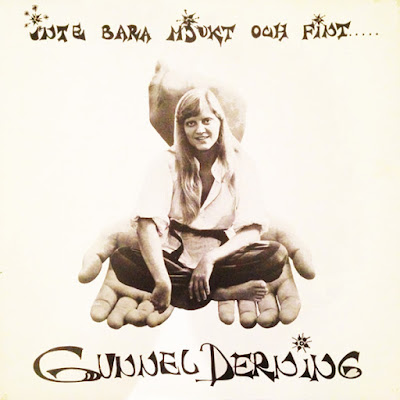 Gunnel Derning reminds me of some other singer but I can't remember which. There's a touch of
Stina Nordström here, but it's really not her I'm thinking of. Then again, it may be just anybody who owns too many Joan Baez records and listened to them all. Just add extra histrionics. Derning wallows in preciosity which quickly makes ”Inte bara mjukt och fint” hard to digest without any following health issues. Not that a better singer – with a less awkward phrasing – would have saved the album as most of the material is typical rosy-cheeked singer/songwriter fare with a Christian vibe. Not that I know if Derning was a Christian; given how it sounds, it's perhaps more likely she later started new age weekend courses with names like ”Get to know your inner mother owl” and ”How to offer your menstruation blood to the full moon for strength and vision”, only £250, sweat lodge included. ”Du talar ord” is a half-decent track, or at least would have been with a better singer and fewer session musicians pretending to be groovy, man.

By the way, isn't the album cover kind of creepy? 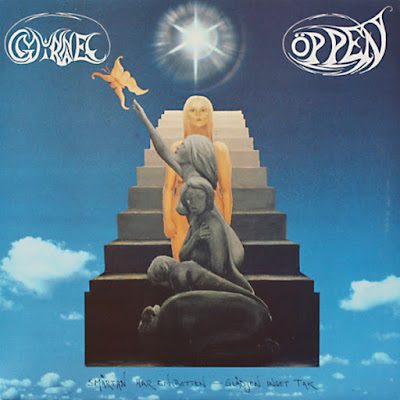 For Derning's second album, she teamed up with previous member of Hare Krishna band Rasa Mikael Lammgård who realizes Derning's every new age dream to the fullest. If you don't trust me, just look at the album cover. ”Öppen” (meaning ”open” – need I say more?) is more progressive in its song structures, but amazingly enough, that only makes it worse. A couple of acoustic songs sound like leftovers from ”Inte bara mjukt och fint”, but plenty of tracks are soaked in 'spiritual' synthesizers and inner-mother-owl reverb. Just when you thought it couldn't get any worse, the track ”Kundalini” adds a rheumatic drum machine to the tablas, mock funk slap bass and fusion fuzz guitars. And if you thought it couldn't get any worse than that, check out the cheap synth horns on ”Mandala”...

I bet dealers will hype Gunnel Derning once they 'discover' her albums as "acid folk similar to Stenblomma" with a price tag equally deranged (unless they already have) but don't fall for any such delusive nonsense.

Posted by SwedishProggBlog at 5:07 PM No comments: 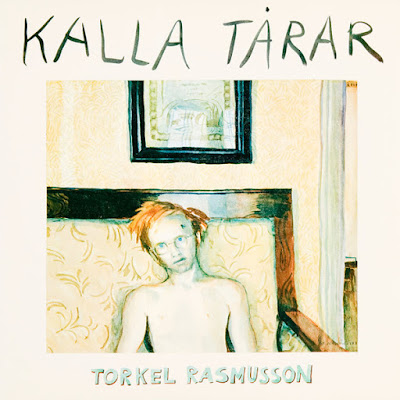 ”Kalla tårar” was Torkel Rasmusson's first solo album following the first demise of Blå Tåget, following three years after their original last album ”Slowfox”. Rasmusson's voice was one of my initial snags approaching Blå Tåget, but once I got used to it – and it took a good while to do so – the poetic shimmer of Rasmusson's songs revealed itself to me. ”Kalla tårar” has a lot of that, and it also displays a more stable execution than what characterizes the Blå Tåget albums. The only former Tåget member here is Mats G. Bengtsson; most of the back-up musicians are skilled players from the Archimedes Badkar circuit. Using Per Tjernberg as a drummer and percussionist certainly provides a solid ground to the song often lacking in Blå Tåget. The title track and ”Detektiven” rock out as much as Rasmusson ever rocked out, while ”Fläskfia” features a wild fuzz solo that would have sounded quite out of place on a Blå Tåget album. ”Det tycks vara en dag” reveals a prominent mid-70's Dylan influence while ”Inget socker” has a tasteful epic, reverb-soaked touch. Eight minute album closer ”Dagbok från en stad” has a more 'closed' and claustrophobic sound that somehow predicts the mood of Stockholm Norra's sole album. Only a couple of tracks bogs down the album a bit (most notably the genuinely nerve-grating ”Snask och snusk”), but all in all, ”Kalla tårar” is a fine and underrated effort. 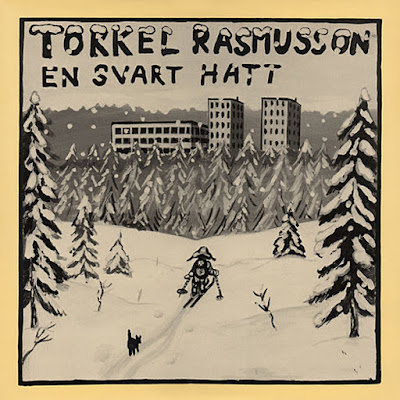 En svart hatt (Mistlur, 1981)
Swedish vocals
International relevance: **
It took Rasmusson four years to come up with his follow-up solo album, and when ”En svart hatt” finally appeared, the 80s had arrived, and with them new production values. ”En svart hatt” has several good but not ”Kalla kårar” great songs in the typical Rasmusson vein, but the sound is a bit on the sterile side, weakening the overall impact. Even the addition of Roland Keijser's usually warm and inviting saxophone sound on ”Natten” suffers from the ingratiating production. The songs might be weaker than on ”Kalla kårar”, but they would have been empowered by a more sympathetic sound. I don't think ”En svart hatt” would ever have been a masterpiece, but it could have been more than it is now: half lost in an unredeemed state.

Posted by SwedishProggBlog at 3:01 PM No comments: